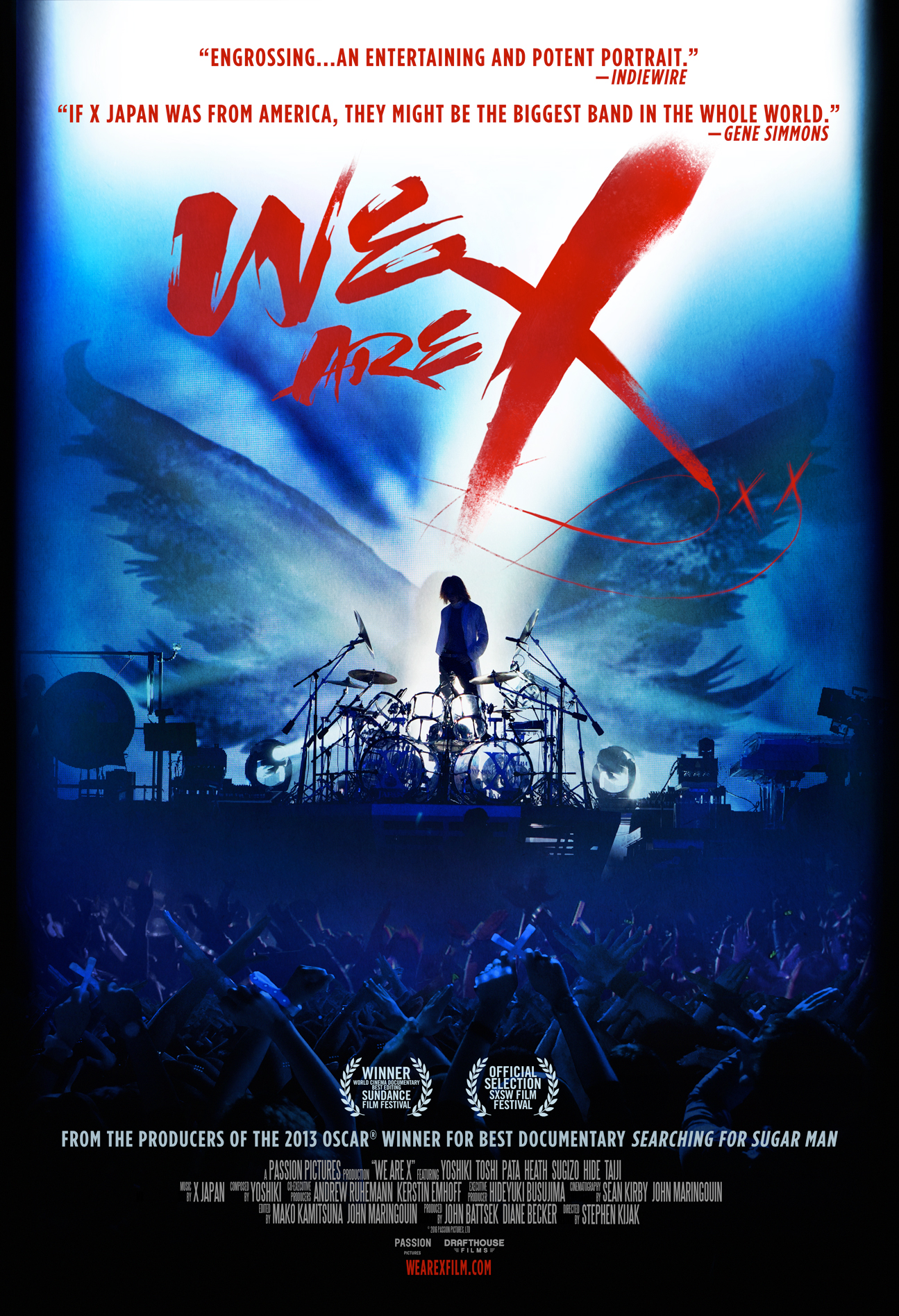 “If We Are X proves anything, it’s that rock bands can experience similar trials: acrimony and fatalities, but also, sometimes, glorious comebacks.” — THE NEW YORK TIMES

“An excellent new doc profiles one of Japan’s most famous bands—and captures the transcendence and pain of devoting your life to music.” — PITCHFORK

“Invoking the spirit of an epic rock show, We Are X expresses all the energy, joy and sadness of X Japan’s music.” — LOS ANGELES TIMES

“The whole ongoing story of X plays like an epic saga of demise and rebirth, a karmic wheel of fortune that continues to this day…Prepare to be blown away.” — AUSTIN CHRONICLE

“We Are X is an emotional rollercoaster from start to finish… a compelling and deeply personal portrait of a band who have one hell of a story to tell.” — LOUDER

“If those guys were born in America, they might be the biggest band in the world.”
— GENE SIMMONS (KISS)

We Are X- Trailer

WE ARE X — the critically acclaimed documentary film about legendary rock band X JAPAN — is now available for the first time in the U.S. on Prime Video for subscribers from February 25th. To date, Japan’s biggest and most influential rock band has sold more than 30 million albums worldwide. They continue to headline the world’s largest stages, including the Coachella Music Festival, London’s Wembley Arena, and Japan’s premiere venue Tokyo Dome, which they sold-out a record-breaking 18 times.

From the Oscar-winning production team behind SEARCHING FOR SUGAR MAN, WE ARE X is an astonishingly intimate portrait of a deeply haunted but truly unstoppable virtuoso and the music that has enthralled legions of the world’s most devoted fans. The film culminates with preparations for X JAPAN’s historic one-off reunion concert in 2014 at New York’s legendary Madison Square Garden.

Hailed as a “fascinating and assured documentary” by The New York Times and “the most dramatic rock story you’ve never heard” by MTV UK, WE ARE X chronicles the exhilarating, tumultuous, and unimaginable history of X JAPAN over the past three decades. It has captivated a wide range of admirers including Sir George Martin, KISS, and Stan Lee. Released theatrically in over 30 countries and featuring a worldwide chart-topping soundtrack, the film has won awards at the Sundance and SXSW Film Festivals and was an official selection at over 30 international film festivals.

X JAPAN — led by YOSHIKI (composer, drummer, pianist), TOSHI (vocals), PATA (guitar), HEATH (bass), and SUGIZO (guitar, violin) — is the most successful rock group in Japanese history. Their 1989 album Blue Blood was named one of the 100 Greatest Japanese Rock Albums of All Time by Rolling Stone Japan. In the band’s early days, their look and sound sparked a global interest in the Japanese cultural rock phenomenon “Visual-Kei”, a wild fashion and music movement X Japan pioneered that spread worldwide.

Named one of the most influential composers in Japanese history, YOSHIKI has sold over 50 million albums and singles worldwide to date as both leader of X JAPAN and as an accomplished solo artist. Trained as a classical pianist, YOSHIKI has composed a wide array of pieces, from the Golden Globes theme song to a piano concerto for the Emperor of Japan. As a classical artist YOSHIKI has headlined Carnegie Hall, with his live concert special Yoshiki: Live at Carnegie Hall airing on PBS stations nationwide. He has collaborated with Beatles producer Sir George Martin, Queen, Sarah Brightman, and more recently, The Chainsmokers, Bono, will.i.am, and St. Vincent. A fashion icon and creator of designer label Yoshikimono, YOSHIKI has modeled for YSL Beauty and was the first Japanese man to appear on the cover of Vogue Japan. YOSHIKI was recently awarded a Medal of Honor by the Emperor of Japan for his charitable efforts through his nonprofit organization Yoshiki Foundation America. His own Sanrio character yoshikitty was created by Hello Kitty designer Yuko Yamaguchi, and YOSHIKI also inspired Stan Lee comic Blood Red Dragon. YOSHIKI also has his own line of wines from Napa Valley in collaboration with Robert Mondavi Jr.

Keep up with X Japan online:

Keep up with Yoshiki online: