Press Release: Yoshiki to visit Paris for We Are X premiere events 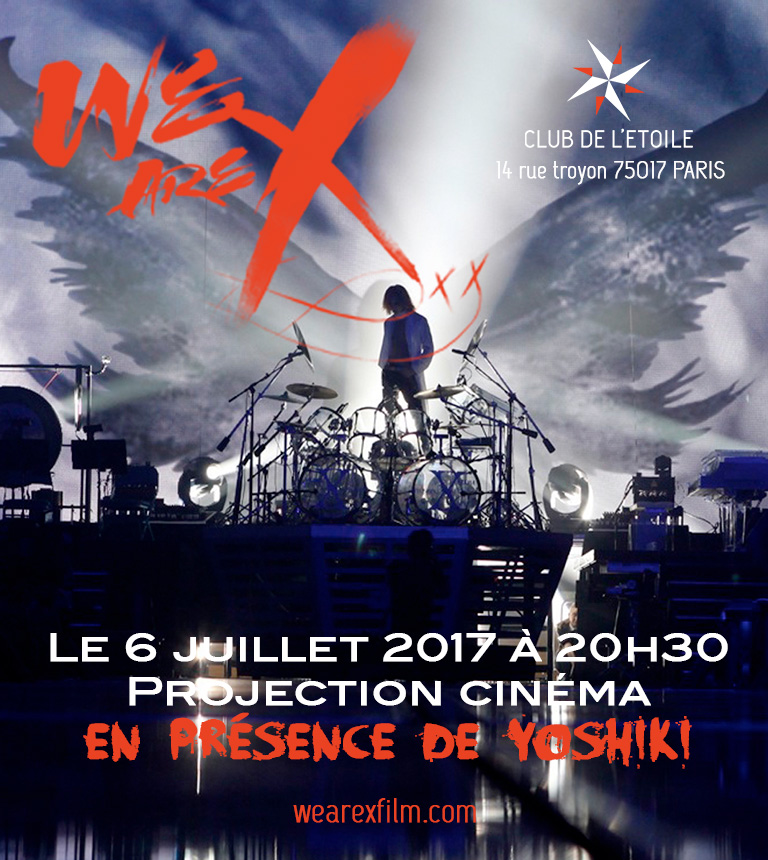 X Japan leader Yoshiki will return to Paris in July for special screenings of the award-winning X Japan documentary We Are X.

On July 7, Yoshiki will appear at Japan Expo to greet fans in-person for the French premiere of the film. Information and schedules can be found at Japan Expo’s website: http://www.japan-expo-paris.com/en/actualites/we-are-x-yoshiki-presente-le-documentaire-sur-la-legende-x-japan_104971.htm

For fans who can’t wait for Japan Expo, Yoshiki will host a preview screening of We Are X one day early on July 6 at 8:30pm at Club de l’Etoile in Paris.
Tickets: http://clubdeletoile.fr/s/we-are-x/

We Are X Trailer (With French Subtitles)

WE ARE X, the award-winning rock-n-roll documentary about one of the most successful bands in history, profiles the blockbuster Japanese rock band X Japan and its enigmatic frontman Yoshiki – composer, classically trained pianist, drummer and the creative force behind the band’s wild success.

Featuring interviews with Gene Simmons, Marilyn Manson, Stan Lee and more, WE ARE X dives into Yoshiki’s life and X Japan’s attempt to break into the American music industry. Supported by concert footage, band interviews and fan photos, the compelling film takes a look at X Japan’s hardships and conflicts including suicide and cultism. Also spotlighting the band’s triumphs, WE ARE X explores the group’s phenomenal success, boasting more than 30 million albums and singles sold, countless sold-out concerts around the world, and fans in North America, Europe, Latin America and Southeast Asia.