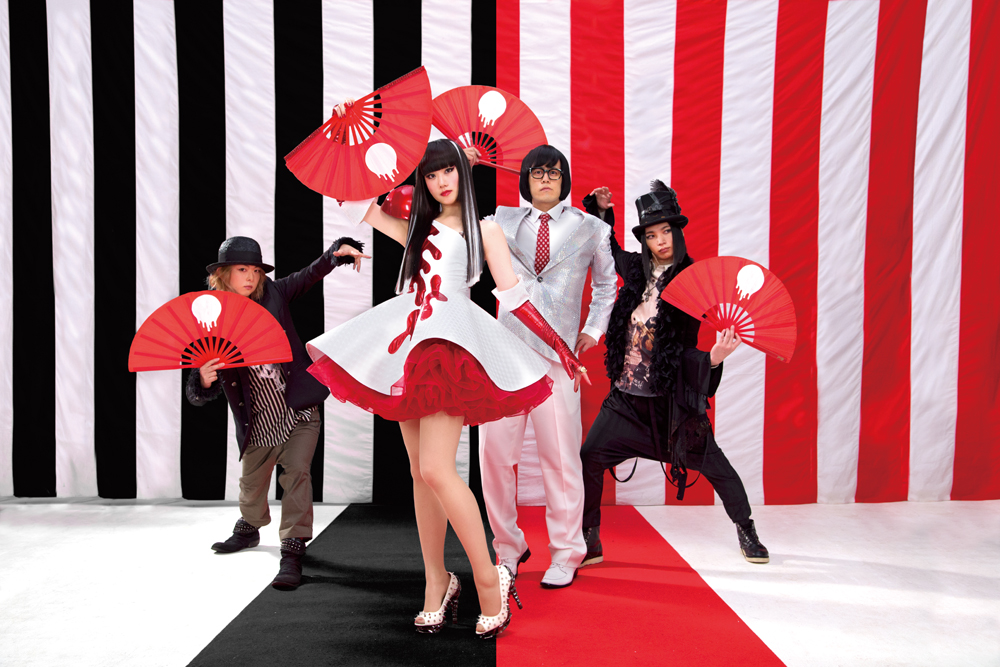 We were at Japan Expo in France and someone asked us why so many young people in Japan commit suicide–there are around 30,000 suicides a year, according to official figures. Japan is at peace, but people are at war in their hearts. That is a result of things like the economy and societal ills, and these issues need to be exposed, because the media hides them just as much as it hides information relating to the nuclear meltdowns.

The “trauma techno pop” band talks about suicide by selfies, blood as the ultimate accessory, and Japan’s rising artists.
Mixing up electro-pop, punk, goth and visual-kei music with performance art and otome (virginal) and Lolita fashion, Urbangarde are one of Tokyo’s more unhinged bands. And yet they surprisingly release music on major labels–and music with a message to boot. Their new album Utsukushii Kuni may be their best to date, and makes acerbic swipes at the government line that Japan’s problems are “under control”.

Having performed at Paris anime mega-fest Japan Expo in July 2013 and seen their home country through the eyes of overseas J-pop fans, Urbangarde express the happy and vibrant Japan the rest of the world perceives, along with the darker undercurrent of post-Fukushima paranoia that is the modern reality. This social commentary is served with lashings of fake blood, bold fashion and bright musical candy apples with a razor-blade center.

Here vocalist Yoko Hamasaki (Yokotan) and songwriter Tenma Matsunaga from the self-proclaimed “trauma techno pop” band tell Noisey what to wear with a nosebleed, why selfies are a gateway to suicide and how Japan is at war with its own sadness.

So what the hell is Urbangarde? I wondered if you were a punk band, a pop group, both of those, neither of those… And then I heard the term ‘trauma techno pop’ and suddenly it all made sense.
Tenma: Techno-pop music tends to sound very cute and fresh, but it doesn’t tend to express the dark and painful side of life, as we do. So we created our own genre name, trauma techno pop.

How did a band as weird as Urbangarde get so popular?

Yokotan: I guess it’s because there’s no other band like us. We used to have trouble finding bands to play together with because we didn’t quite fit in. But I think people have gotten used to our otherness now.

What kind of people listen to your music?

Tenma: There’s a Japanese word, ‘chuunibyou’, which means a person who is stuck in the middle of puberty, an eternal 14-year-old. It’s a bit like an otaku. Those guys are our fans.

The title of your album, Utsukushii Kuni, takes a pop at Prime Minister Shinzo Abe, who wrote a book of that title to mean ‘Beautiful Country’. You’ve changed the kanji so that it means ‘Depressed Country’, in reference to the high suicide rate and other issues. And your previous album, Geiger Counter Culture, was a comment on post-Fukushima Japan. Do you consider yourselves provocateurs?

Tenma: Yes. Before the 3/11 earthquake we were quite socially withdrawn, and I was a chuunibyou myself, so we made music aimed at that subculture. But after the earthquake there has been a lot to get pissed off about in Japanese politics, and now we feel like we have a message to get across.

Our new album is about modern Japan. Personally, I think it’s possible to be patriotic while also being cynical, so that’s our stance. It’s easy to say that Japan is a wonderful country, and I do think Japan’s artistic culture is first-rate, but our politics are third-rate–we’re way behind the rest of the world.

Overseas fans of J-pop might be fooled into thinking Japan is a bright and happy place, but the darkness is very close to the surface. The face is beautiful but the heart is blue.

Tenma: Exactly. We were at Japan Expo in France and someone asked us why so many young people in Japan commit suicide–there are around 30,000 suicides a year, according to official figures. Japan is at peace, but people are at war in their hearts. That is a result of things like the economy and societal ills, and these issues need to be exposed, because the media hides them just as much as it hides information relating to the nuclear meltdowns.

Is that what your recent single “Sakura Memento” is about? It’s a very cheery song on the surface, flirting with various stereotypes of Beautiful Japan, but the lyrics seem pretty barbed.

Tenma: Yes. There’s a certain extreme image of Japan that the rest of the world has, so we played off that. It’s a bit like if you put some text into Google Translate, change it into another language and then back into your own, and it comes back a bit garbled. Similarly, you get an askew version of your own culture when you view it from the outside.

Tenma: Sure. The part where she’s repeating ‘Hello Kitty’ over and over sounds like she’s saying ‘harakiri’, don’t you think? I wondered whether that was a deliberate double meaning.

Yokotan: The funny thing is that she looks just like the sort of J-pop fans we saw at Japan Expo in that video.

What is the album track “Jisatsu Nyuumon (Introduction To Suicide)” about?

Tenma: It’s about the danger of selfies. You hear about people who take all these selfies as a way to cover up the sadness in their heart, and you hear about young people who commit suicide because their selfies don’t look good. People with low self-esteem take these pictures and put them online as a way to prove their own existence.

How about the song “Girls Collection?”

Tenma: It’s about feeling you need to get hold of the right clothes or you might disappear.

Yokotan: Fashion used to be rigidly divided–you’d have Lolita fashion, gyaru fashion, punk fashion and so on. But recently if you go to Shibuya 109, which was originally the epicenter of gyaru fashion, it now sells clothes that a Lolita girl might wear, and so on. The genre walls have come down. Today you can dress like a rocker, and tomorrow wear girlie clothes. Every day a new transformation, and with that, you might forget who you really are.

Urbangarde always look super-stylish, and you also have a lot of blood in your videos. Is blood the ultimate accessory?

Tenma: Oh, sure. Blood is the easiest way to visually represent life. Blood is associated with passion, which is important to me. And fashion is an important part of life too, for a lot of Japanese women especially, as a way of confirming your identity.

What color outfit goes best with a nosebleed?

Tenma: That’s right! We’d get in trouble if we said that though, haha.

Yoko, you often have totally cool streaks of blood or black tears rolling down your face in your videos. How long does it take to apply those?

Yokotan: Oh, it’s pretty quick! Just two minutes. It’s fake blood. I apply it myself. If you put on too much it goes runny, and too little looks thin.
Tenma, you’re always dressed to match Yoko in videos, with your hair color and outfits changing accordingly. What is your everyday style?
Yokotan: A suit and glasses have kind of become his identity. He looks like Austin Powers, haha.

Tenma: I like pink. But when we were in France, I found out that men there don’t wear pink.

Yokotan: Ha! How about in America?

I think it depends on the state. Men can get away with wearing pink in New York or California, but maybe it’s risky in the Deep South. I’m from Britain, and it depends where you are there too.

Yokotan: What color do the Brits associate with sex?

Tenma: The thing I love about Britain is the black humor. I saw an episode of “Red Dwarf” where they had to kill Mahatma Gandhi! He was running around with a machine gun. That’s outrageous. I love Monty Python too. That’s a big influence on Urbangarde.

So far the only country you’ve played in outside of Japan is France, right?

Tenma: That’s right, in Paris and Toulouse. I’d like to go to more places.

Do you think Japanese music is well represented overseas? Does the West know the right kind of Japanese artists?

Tenma: Japan Expo was mostly idols, Visual-kei, anime songs and Vocaloid, and so I think music that has a strong taste of Japanese culture or Tokyo culture has the easiest appeal. We don’t sound like the other kinds of Japanese music that are well known overseas.

What Japanese artists do you think have a shot at breaking through overseas?

Tenma: Japan is very good at splicing genres. For instance, I think Babymetal could be big overseas, because it seems unlikely that you’d find a group of cute young girls performing metal songs anywhere but Japan. A female metal band overseas would be much tougher, whereas Babymetal are young, innocent, fresh girls in a hybrid with metal, which is very Japanese.