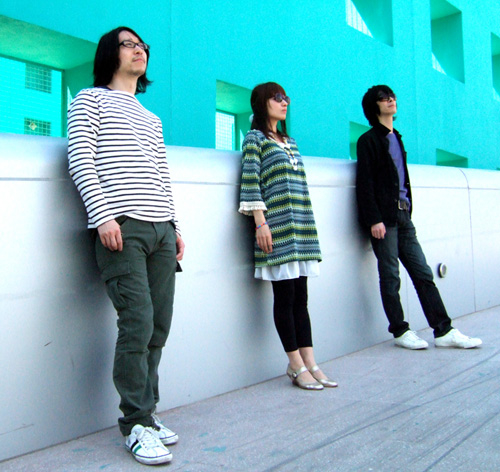 Some artists set their sights high, aiming to shake the music industry with an avant-garde style or change listeners’ perceptions of the world. Others focus on making simple, good music. Swinging Popsicle falls into the latter category, and we love them for it. Since 1997, they’ve released breezy, Beatles-inspired music bolstered by smooth melodies and impressive musicianship–Mineko Fujishima’s sweet, understated singing, Osamu Shimada’s tasteful guitar licks, and Hironobu Hirata’s subtly intricate bass work. Swinging Popsicle hasn’t released any new albums since 2009′s Loud Cut, a mash-up of new music and tweaked older recordings, so Hirata took some time to tell us what the band’s been up to via e-mail.

It’s been nearly four years since the release of your last full album of new songs, Go on. What has Swinging Popsicle been up to since then?

Hironobu Hirata: Lately, we’ve been providing music for the PC and Xbox game publisher Nitroplus. We created the song “(a) SLOW STAR” as the main theme of Sumaga, “Perfect Loop” for Sumaga Special, and “Kagonotori” as the end theme for Axanael. We also released the collaboration album with Nitroplus, Loud Cut, which contained some Nitroplus theme songs and new versions of some of our favorite past songs. Swinging Popsicle provided music for and produced an album for Korean vocalist Taru, and we’ve traveled to Korea to perform with her. Personally, I’m also the music producer for a band called “Daiichi Uchuusokudo” featuring the Nitroplus character Super Sonico.

Who are some of the artists you worked with recently in your live shows? Are there any artists you regularly perform with?

Hironobu Hirata: Huckleberry Finn, Akiko Morikawa, Vasallo Crab 75, Keigo Iwase (formerly of 19), Plectrum, and Nitroplus vocalist Kanako Ito have been our favorites to work with recently. Plectrum is a guitar band we’ve worked with for a long time, and the members of sometimes play as support members for Swinging Popsicle’s live shows. They have a wonderful sound, and they have a good relationship with Teenage Fanclub. [Editor’s note: Teenage Fanclub themselves named Plectrum.]

How did Swinging Popsicle start working with game studio Nitroplus on the games soundtracks for “Sumaga” and “Axanael”?

Hironobu Hirata: There was a fan of Swinging Popsicle at Nitroplus, and the company called us to work on music for their games. Pop music is rare in PC game soundtracks, so it was an exciting challenge. The background music for these games is really interesting to me, too, so I’ve become involved in creating the BGM for the games.

How many years has Swinging Popsicle been playing music together? How do you keep your excitement for making music?

Hironobu Hirata: It’s been 15 years since we formed the band: me, Shimada, and Fujishima. It’s pretty rare in our music scene for a band to have the same members for 15 years. Creating music together for a long time makes us feel that our music is very precious, and we grow to love each Swinging Popsicle song. I always appreciate that the other members still play music with me. I constantly focused on keeping a level of creativity and passion that matches the other members, so that the members think “I want to sing this song,” or “I want to play this song.” I also want them to think, “I want to play with Hirata!”

How has the current crisis in Japan affected your songwriting?

Hironobu Hirata: Due to the radiation accident in Fukushima, there were many times that there wasn’t enough electricity and we had many power outages. Some concerts that consume a lot of electricity were canceled, and sometimes the recording was interrupted. A music performance nowadays relies so much on electricity. We participated in a live show called “We can sing even when there’s no electricity.” We also had a live show with only an acoustic guitar, a wood bass, and natural vocals. The song we performed for the first time at that time is our latest song, “Do your Homework.”

But all of that is just the practical effect. The personal effect is much more important. Since the disaster on 3/11, all of the musicians in Japan have started to think about the power that music has. We’re thinking about the things we can accomplish through music, what musicians should do now, and what we should sing about. Each of us are creating new music with “hope.” And we appreciate the days that we can work with music like it’s normal. I believe that this experience will make all music beautiful.

Hironobu Hirata: The core of our music is a warm and catchy melody, good harmonies, and the beautiful voice of Mineko Fujishima. A lot of modern music is often made with machines, and I think it just makes the music sound so similar, and it lacks warmth. Since Mineko’s voice is wonderful and cannot be copied, I would like to improve our musical sound so it can match that level, and when we get there, that’s what makes our songs “Swinging Popsicle.”