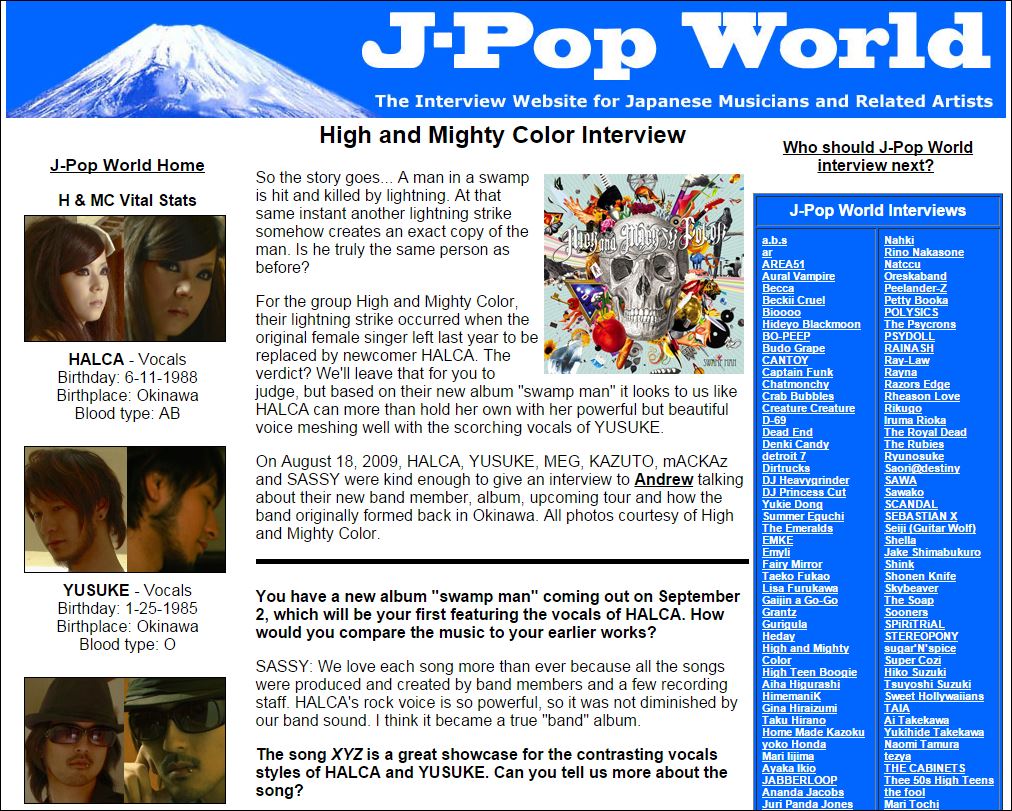 You have a new album “swamp man” coming out on September 2, which will be your first featuring the vocals of HALCA. How would you compare the music to your earlier works?

SASSY: We love each song more than ever because all the songs were produced and created by band members and a few recording staff. HALCA’s rock voice is so powerful, so it was not diminished by our band sound. I think it became a true “band” album.

The song XYZ is a great showcase for the contrasting vocals styles of HALCA and YUSUKE. Can you tell us more about the song?

YUSUKE: We wrote this song before HALCA joined. We wanted to express the contrast of the heavy riff and melodious sound of High and Mighty Color. HALCA’s vocal made this song strong and gave it fresh feelings. It added beauty and the song grew up. I think you can feel the best vibes of HALCA in this song.

The song good bye is a real head banger. Can you tell us what the song is about?

MEG: This is a hard song, the opposite side of cool songs. I think its a virtue trying something so hard. The lyrics are also hard. It’s about saying goodbye to a disgusted friend.

The video is intense, featuring lots of tight shots of the band. Can you tell us about shooting it?

MEG: The atmosphere of the song was emphasized in the new video. Its location is the ruins of a shop. I think this is a perfect video. I like the cut in which HALCA is singing away from the mic on the break part.

What’s the story behind the album’s title song, “swamp man”?

YUSUKE: “Swamp man” refers to a philosophical thought experiment about identity. This title asks the listeners if High and Mighty Color has changed dramatically after Marky (Maakii) left and HALCA joined.

After releasing your previous albums with Sony Music, you will be releasing “swamp man” through Spice Records. Can you tell us more about this Okinawa-based label?

MEG: Spice Records provides more communication with each member, so it’s a good influence in our songs.

Tell us more about your writing and recording process.

KAZUTO: We concentrated and focused on this album for a short time. It took about 2 months. Each member made songs and demo tracks, then brought them to the studio and did pre-production with the rest of the band.

YUSUKE we have to ask… How can you sing so powerfully and not lose your voice?!

YUSUKE: Just do it with so much guts that you won’t regret it even if you die!!

Does the band have any rituals you do before a show?

YUSUKE: We make a circle with metal peace, and shout!!

Let’s learn more about the history of the band. MEG and SASSY, can you tell us how the two of you met and first formed a group?

SASSY: We were talking like “Let’s make a band with the hottest person.” Then we were looking for members and formed a 5 man band for a band competition.

mACKAz and KAZUTO, how were you asked to join the band?

mACKAz: I joined the band because they wanted a person who wanted to go to the top.

KAZUTO: Me too. I was a student at a different high school at the time, so I went to their school for practice sessions.

YUSUKE, can you tell us how you first met MEG and how you ended up joining?

YUSUKE: We met in a music club in our high school. SASSY and mACKAz had been in a band since junior high. I liked them and joined the band.

At the time you played under the name “Anti-Nobunaga.” Who came up with that name?

KAZUTO: I came up with the name. It occurred to me one day when I woke up in the morning. I guess it is probably from God.

Where did the name “High and Mighty Color” come from?

SASSY: First, I wanted to use the words “High Collar.” In the Taisho Era of Japan, people from Europe wore high collar clothes, so they say “High Collar” for modern thing. We searched for good English words, found “High and Mighty” and then added “Color”.

In 2005 you had the good fortune of having your song Pride featured in the anime show “Mobile Suit Gundam Seed Destiny.” How did that come about?

YUSUKE: At that time, our director brought this project. We accepted it at once because we loved Gundam so much.

Two of your songs, Tadoritsuku Basho and Oxalis, were featured in the movie “Anata wo Wasurenai”, in which your original female singer Maakii had a role. Can you tell us about that?

MEG: She did the movie because she also wanted to be an actress. These songs were arranged for the movie.

Maakii of course got married in 2008 and decided to leave the group. HALCA, can you tell us the story of how you got the call to be the new vocalist for High and Mighty Color?

HALCA: I was selected in the vocal audition.

Did you feel a lot of pressure trying to replace Maakii?

HALCA: I felt so much pressure and worried if I would be compared with Marky, and if fans would accept me, and I would change my mind about it from day to day. But I am having more fun than pressure now.

Your awesome performance in the video for good bye should show everyone you’re more than up to the task. So what has this year been like?

HALCA: We have done recordings with me and rehearsals for our first tour every day. This is such an important year for us. I think the year 2010 will also be a great year after the tour ends.

Let’s take a trip into the past and learn a little more about everyone’s background. Can each of you tell us how you first got into music and what artists inspired you the most?

HALCA: My parents were in bands, and they always played good music in my home.

YUSUKE: I had never thought about doing music till junior high. A band’s live show at a welcome party for high school changed my life and led me to do this. After I realized being in a band was fun, I have been playing music without any doubt. I think what we do is absolutely cool. I listened to music that my sister played: Mr. Children, TRF, Luna Sea… In high school I was into music like Limp Bizkit, Rage Against the Machine, System Of A Down… influenced by my band members.

MEG: My mother plays the mandolin, so I guess it effected my music sense. I always thought about the band and music 24 hours a day because I was hanging out with band members instead of normal high school friends.

KAZUTO: Music was the only way to share with my friends for me. Guitar was my place. I didn’t have any social things or specialties. As I got more into the guitar, I didn’t want to be without my guitar. I was only a junior high school student at that time, but I can play music because of that experience.

mACKAz: I was impressed with a band who played like crazy in high school. I wanted to be a player like that. I started to checkout music from the Japanese band boom. I liked music like TRF and globe when I was an elementary school student. I was into Glay, L’Arc-en-Ciel and Luna Sea when I was in high school. After I started a band, I listened to Mr. BIG and Metallica.

SASSY: I played with lots of bands, and played many cover songs when I was a high school student. I knew that my friends and the local hardcore bands played metal songs like Metallica, then I got into it.

Do you think your upbringing in Okinawa has had an impact on your musical style?

KAZUTO: The great people in Okinawa and its atmosphere influenced our music. We can do this music only from Okinawa.

How did you each pick the instrument you play?

HALCA: I always liked singing a song, but I played a guitar in my first band. Then I started to play guitar with do vocals. After I joined High and Mighty Color, I became a vocalist.

YUSUKE: I went to Karaoke with SASSY when I was in junior high. Then he invited me to join the band. I practiced death voice so much because of the influence of Metallica.

MEG: Because of the influence of my friends, I decided to get into music and be a professional without thinking when I was still in junior high, and here I am today.

KAZUTO: My father gave me an acoustic guitar when I was in junior high. That’s how I started with the guitar. That guitar is a precious thing for me.

mACKAz: From the influence of the Japanese band boom. I chose bass because the friends around me played guitar.

SASSY: I started with the guitar first, but I was not good at it. So, I tried drums because no one did the drums around me. It fitted me so much.

What did your family and friends think of your decision to become musicians?

HALCA: They supported me and encouraged me.

KAZUTO: They trusted me and supported me. I can never thank my parents enough.

Does anyone have any side projects they’re currently working on in addition to High and Might Color?

Do you have nicknames for each other?

If you could pick one thing about Japan or Okinawa to share with the whole world, what would it be?

KAZUTO: In Okinawa, there is an old proverb “Once you met, you are brothers.” I think this is a beautiful thing.

YUSUKE: We say “Nuchigusui” for the word “delicious” in Okinawa dialect. This originally means “medicine of life.” “Health” came from delicious foods.

Outside of music what do you like to do for fun and relaxation?

mACKAz: I am working out, training my muscles, because I think metal sounds are created with muscle power. I hope my muscles will become the best costume for me.

What are the band’s plans for the rest of the year?

SASSY: A live tour starts after the new release. We want to level up our skills through much live and experience.

Do you have a final message to all your fans?

HALCA: Keep your eyes on High and Mighty Color.

YUSUKE: We present a gift to fans who were waiting for our comeback. Please feel our spirit and change with HALCA.

MEG: I want to play not only in Japan but worldwide. Please join in the High and Mighty Color movement!!

KAZUTO: What I can do is play my favorite and best music with my band members. Please support us if you feel anything from our sound.

mACKAz: We made a cool album!! Feel the new songs in our live. We want to see you at the stage. Please come to our show!!

SASSY: We will go to your place with our new sound. Please come and feel our new live and new songs.