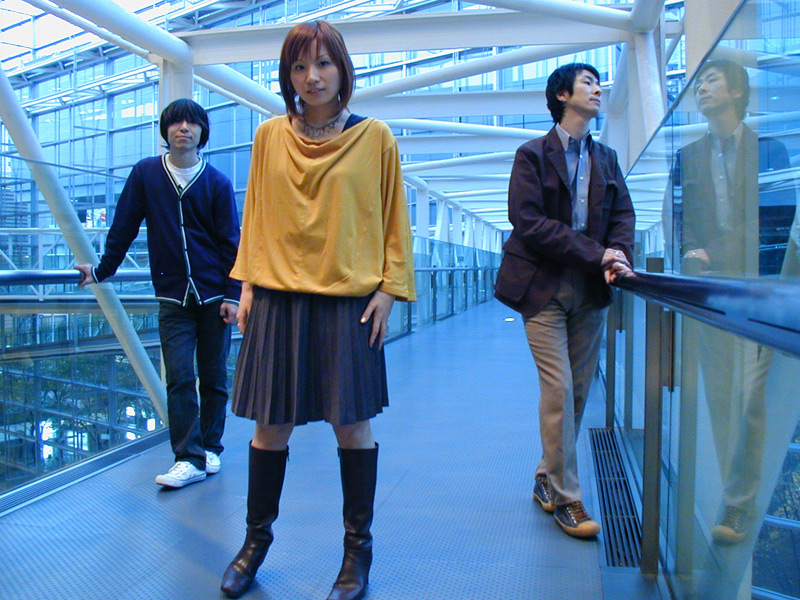 Formed in Japan in 1995, Swinging Popsicle‘s pop style showcases catchy guitar work as well as Fujishima Mineko’s emotional vocals and writing talents. Swinging Popsicle members are Fujishima Mineko [vocals], Shimada Osamu [guitar] and Hirata Hironobu [bass]. In May 2006, the band played for the first time in the USA in San Jose, CA. I talked with Fujishima about the band’s live appearance and what they thought of overseas fans.

First, could you tell me your name and what instrument you play?

Fujishima Mineko. I play guitar and keyboard during our shows.

What artists did you listen to growing up?

As far as Western music, I started listening to Top 40 stuff from the 80s when I was in fifth grade. Starting with Wham! and Madonna, I’d listen to whatever was on the radio.
Even now, Fairground Attraction’s hit “Perfect” influences my songs.

Who did you see in your first concert?

Maybe Matsuda Seiko? I forget, but my first concert was probably a Japanese [pop] idol from around that time.

In May of this year, Swinging Popsicle performed in San Jose, CA, USA. It was your debut in the US. How much did you anticipate the performance beforehand?

I had heard that American fans are very direct in their reactions so I was a little worried, and when I’d think about it more I couldn’t sleep (laughs), so I decided to just play it natural without thinking too hard. Including the sightseeing, I think everything in the US was a lot of fun.

What is your most vivid memory about the trip?

There were a lot of fun and wonderful things, but just before the Swinging Popsicle show at the Civic Auditorium on the second day, right as the announcer said “next up is Swinging Popsicle!” we got such a warm welcome. I thought, “everyone knows Swinging Popsicle!”, pretty much stopped worrying, and was so overjoyed! As I relaxed and faced the stage, I was really thankful towards the whole audience.

Who are the songwriters in the group? What inspires you when writing?

Songs are mostly written by our guitarist Shimada Osamu and bassist Hirata Hironobu. I mostly take care of the lyrics.

Besides yourselves, if you were to recommend a band from Japan to fans overseas, who would it be?

It’s not a band, but I think Bonnie Pink is a great songwriter.

How would you describe your music?

It has a pop melody, so it’s the kind of music you’ll end up wanting to hum to yourself. But it’s not tacky! Also, everyone likes rock so when we add that in, it gets rough!

When can we expect a new release?

Is there anything you’d like to say to overseas fans?

We’d love to come back and do another show! And get crazy with everyone! Everyone from the San Jose show, you’re awesome like the California weather! Don’t forget Swinging Popsicle, okay?