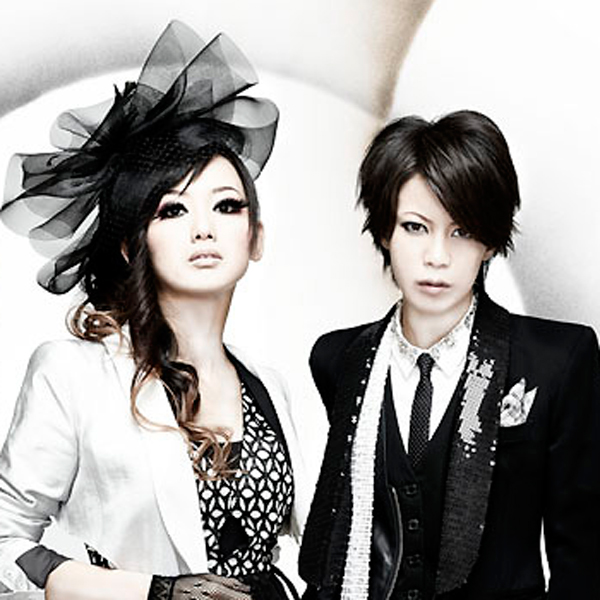 Before I started a band, there was no way to communicate with artists so easily. When I started using social media, I thought a lot about the way I’d use it, but it’s just wonderful that fans can feel close to us despite the distance. On my Twitter, I even had a special appreciation event for reaching 4000 followers. It’s cool that everyone can enjoy the band not only at the live shows but on the internet as well.

exist†trace is one of the first all female visual kei (VK) bands from Japan. They formed in 2003, toured extensively, released several albums to international acclaim and in the process became both rockstars and role models to their devoted fans worldwide. Then a decade later, the band reinvented their sound with duel vocalists. Their original vocalist Jyou was joined by miko who also plays the guitar. Both Jyou and miko were kind enough to answer a few questions for RiceburnerFM via email.

RiceburnerFM: Since 2013, there has been a dramatic change in exist†trace’s sound. Your band now features dual vocalists. How has this change affected exist†trace’s creative process?

miko: I don’t intentionally write songs for dual-vocals. After the song is written, I decide who should sing, like “Jyou would do this part cool,” or “This part might be a better fit for miko.” So, as far as how songs start, there may not be that big of a change compared to before.

RiceburnerFM: exist†trace has a large international fan base. When you’re making new music, do you ever think some songs will be more popular in Japan or overseas?

miko: I don’t think about this particularly. Whether it’s in Japan or overseas, I believe that the songs I put my heart into will be appreciated. Also, if we think too much about that type of thing, we’ll just get farther away from our own ideal expression.

Jyou: It’s the fact that we can know right away what the fans feel at the moment about our CDs and music videos. It makes the distance between Japan and overseas much smaller.

miko: Before I started a band, there was no way to communicate with artists so easily. When I started using social media, I thought a lot about the way I’d use it, but it’s just wonderful that fans can feel close to us despite the distance. On my Twitter, I even had a special appreciation event for reaching 4000 followers. It’s cool that everyone can enjoy the band not only at the live shows but on the internet as well.

RiceburnerFM: Two recent videos “DIAMOND” and “Spiral Daisakusen” are visually amazing. How did you decide the style for each of these videos?

miko: I think about the most interesting element for the song, like the digital sound we’d never had for “DIAMOND” and the disco sound for “Spiral Daisakusen”. The members and the visual director discuss how we can express these elements in an attractive and interesting way. I think our new MV “WORLD MAKER” is really cool. I want you to enjoy it!

RiceburnerFM: What is the most unusual experience that you have had while on tour this year?

miko: Even when the lights came back on, they went off right after. I couldn’t see my hands on the guitar while playing in the dark. I was so frustrated afterwards. But even with all that trouble, the fans had fun. We became really excited, too. I think this live show turned out be a miracle show.

Jyou: We were able to finish the show, thanks to the understanding and cooperation of the IGU family. However, we felt strongly that we couldn’t leave it like that, so we decided right away to have a “revenge” live show! We want to come back and express our music the way we couldn’t fully deliver with 120% power or more!

miko: On the first day of our US West Coast Tour, we couldn’t start playing due to equipment trouble, but the members and fans somehow get hyped up at at times like that. Even when there’s trouble, we can make it work!

RiceburnerFM: Jyou, your voice gets a hard workout while performing. What do you do in-between gigs to keep your voice in good shape?

Jyou: I use steam on my throat to moisturize. If this doesn’t work, I put on a cooling pad on my throat and then there’s no talking, no watching TV, and no listening to music. I let my body rest. That’s what works the best.

RiceburnerFM: miko, your look has always been feminine. Do you ever feel like dressing up as one of the “boys” on stage?

miko: Yes! I like my current style, but I want to dress manly once in a while. One time, we had an event that combined a fashion show and a live show, and I went out on the stage dressed as a man at the very beginning. I still remember the surprised faces of fans at that time. I want to surprise them like that again.

Jyou: When you’re talking about miko, it has to be false eyelashes and curly hair! miko’s position on the stage is Jyou’s right side. It’s better to have your hair up to the side so that side of your face is visible to the people next to you!

miko: Jyou has cool, long-slitted eyes, and I want you to take a good look at photos and study her face. Also, it’s not only the looks, but the smooth and elegant movements. I want you to keep that in mind, and go for the cosplay that’s cooler than Jyou! … Even though Jyou will still say “I am cooler!”

RiceburnerFM: exist†trace is one of the first all female visual kei bands. What are your thoughts about being an inspiration for other female rockers?

Jyou: Every time I hear “I started a band inspired by IGU,” I’m genuinely happy. At the same time, I get a strong feeling that I have to deliver my best vocals so I don’t disappoint the people who say this. I want to be a vocalist who can always do something that nobody but Jyou can do.

miko: I’m happy if I can give inspiration. There are many female bands with a cute style, but there are very few bands that choose the cool style like we do. I hope there will be more cool bands. But, first we want to be a band that inspires everyone even more, so I want to write more cool songs, practice a lot, continue the simple things, and climb up to the top.

RiceburnerFM: exist†trace’s new album WORLD MAKER was released in September 2014. What does the title mean? What can you tell us about the new album?

miko: It began with the image that the 12 songs on the album were like planets surrounding us. The title WORLD MAKER voices the hope of making the exist†trace world much, much larger and reaching more people with these songs. Along with this, I hope listeners can create a place where they can be their true selves in their own situations and become WORLD MAKERS themselves. The 1st album VIRGIN was more like a collection of recorded songs, but for this album, we tried to package the heat from our live shows,so you can almost call it a “live album.” As we started performing the new songs at live shows, we kept making changes until we packed in only the sounds that absolutely say “This is truly us now.” So I’m sure that overseas fans will be able to feel the heat of our live shows from listening to this album. Please listen to it (WORLD MAKER), and look forward to us coming to your town someday!